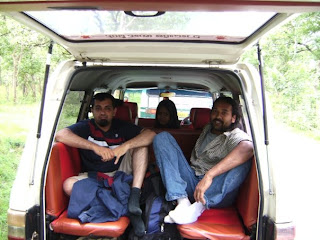 Ooty was good. The walk on Saturday was the longest in recent memory and the descent into wet clay the most exciting. The food was consistently bad but the company was consistently entertaining.

The International Youth Hostel turned out to be terrible. The rooms were dimly lit with bunk beds and no ventilation. The promised bonfire in the garden proved to be insufficient incentive for us to stay there and so after some lunch, much deliberation and fretting and fuming (which I slept through) we reached Moti Manor. Decent enough for the money we were paying.

Friday evening is where memory's playing a bit of a bastard. I had a terrible headache and for some reason didn't take a tablet. Basically i think everyone got drunk and went to bed. I got up a bit later and threw up. Three times.

Luckily by morning, the headache was gone and coffee had arrived. Terrible coffee. All over Ooty, just terrible coffee and tea. Why? It's a bloody tourist destination and they can;t get their fucking tea and coffee right? WTF! Also, it looks like every single government official in Tamil Nadu is out to fleece the tourist. The demands for ten rupees and fifty rupees seemed unending. 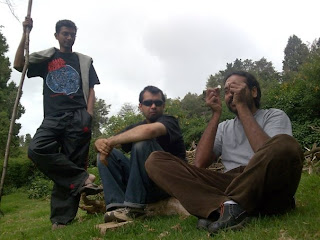 Day 2 was pretty much it. The definition of perfect. Morning coffee was fuck all but it didn't stop me from having two cups. We went to yet another fuck all restaurant for breakfast, ate bread omlette because it was the only breakfast food available and there were simply no sausages and bacon to be had. Who would have thought huh? A former destination of fat British bastards and sixty years after they've gone there's no sign of bacon and sausages and eggs for breakfast. Anyway, the omlette was all right and breakfast was done. 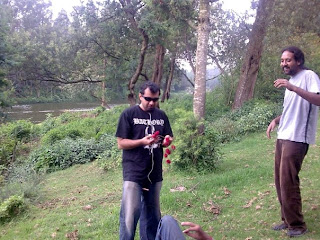 So anyway, Saturday morning we hit the lake and managed to find a half way secluded spot on the banks. It was awesome. The weather was perfect, the grass was green, there were ready mixes galore, wild litchis and all round good cheer and bonhomie.

After the lake and another shitty lunch in Hyderabad Biryani (Empire's very poor and very distant cousin) we set off once again. This time the mission was to find another place that was devoid of all human life. The Panaman mentioned a near mythical place called 7th mile (probably

from the dark recesses of his childhood memory) and off we went looking. I'm not sure where we ended finally. A walk through the Hindustan Photo Films employee quarters (Indunagar) led us to this unbelievable place. 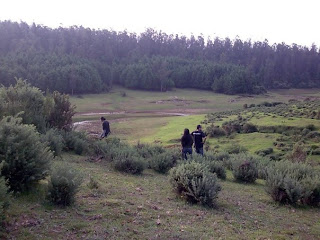 I know Ooty's filled with tourists and honeymooners and locals out to make a quick buck but the area still has some absolutely beautiful places. You just have to make the effort to look for it. Anyway, look at the pics and feel the splendor of this land. It was a long walk though and at times it became a bit of a trek but we climbed up a hill, came down a mountain, survived close encounters with some really wet clay and finally came to this place that was deemed perfect to sit and rest and recharge batteries. A plain grassy field stretched out before us with horses grazing, a cool breeze blowing and this thick pine tree forest beyond the plains. It was quite awesome. 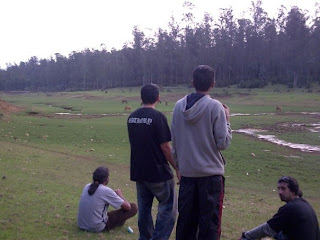 It was a miracle that the weary travelers were still on their feet by the time they got back to the hotel and there really was only thing left to do on their last night in Ooty. Open that bottle and start drinking.

….we just slept but.

They were six and they were brave

Singular mission, no world to save

Search for the perfect holiday

That was their only aim.

To Ooty they set off, the hills were happening

2 nights and 3 days the perfect vacation

Moti Manor was our final destination

The lake was great, the grass was green

The litchis were the reddest I'd ever seen

The Panaman and Keitho went fishing

Caught a few hats, and other dirty things

The food in Ooty deserves a stanza

Uniformly fuck all, even Bob's is better

Coffee and Tea, they taste the same

Our Biryanis and Burjis were utterly lame.

The 7th mile was pretty funky

Long fucking walk but all was well

Didn't want to come back and be a desk monkey

I tell you! This holiday was swell.