Hello there. Been a while. Again.
I'm itching to talk about something that's bothering me but if I do, I might get sent to jail. So I won't. Welcome to the world's largest democracy.
Instead I'll post a couple of long overdue obituaries. 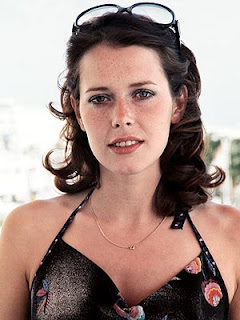 Sylvia Kristel died a while back. Oh Emanuelle! This saddened me just because of how incredibly awesome Kristel is. An awesomeness that death cannot take away.
Jaspal Bhatti died in a road accident. This was tragic. Flop Show was an integral part of growing up with DD and Bhatti was quite an accomplished satirist with a few good years left in him.

A while back I was trying to make more room on my laptop and ended up deleting my entire collection of erotic photographs. Ugh! Don't go on a deletion spree at 2 am when you should be sleeping. It will never end well. Sylivia Kristal, Soledad Miranda, Monica Belluci, Barbara Bouchet, my collection of beautiful butts. All gone in the blink of an eye. The places I got them from don't exist anymore so that's that.
Special mention to Ray Stevenson and Yvonne Strahowski in the new season of Dexter. Starhowski for being the hottest woman ever on Dexter and Stevenson for being the most badass. I hesitate to call him the villain of this season. He's almost sympathetic and there's a part of me that wants the character to live on to the final season next year. I hope the show ends with Isaac disappearing Dexter. Preferably dumping his body in the same ocean that Dex uses and then going off to find his Argentina. Stevenson is absolutely riveting as Isaac and his scenes with Dexter are the best things in this season. Excellent casting. Makes me want another Punisher movie.
In other news, Arrow is proving to be quite good. The voice over and dialogue is still hokey but I'm addicted to this show right now. Also, all of the little asides to the DC universe are a fanboy's wet dream. Deathstroke, Deadshot, China White, The Royal Flush Gang and Huntress makes her debut next week but the coolest reference so far has been "taking the last train to Bludhaven". Whether Nightwing will make an appearance is doubtful but it was pretty cool all the same.
There's been tons of great doom metal this year but the only album that physically and emotionally exhausted me was the new Worship. Terranean Wake is truly the stuff that suicides are made of.   There's a sense of hopeless despair here that just overwhelms.
There's a new Antimatter out. "Fear of a Unique Identity" it's called and I'm waiting to play it tonight once I get back and the city's fast asleep. We're almost up to December and the good shit shows no sign of stopping. Detailed report will follow the next time I'm back here.
Now, weather.
The last 10 days or so have seen biting cold, a mini heat wave and now rain. Global warming? Possibly.
Posted by reeferjournal at 9:50 AM 3 comments: